Rope-less Fishing: A vision for how it can work

The latest assessment of the North Atlantic right whale population is bleak. The number of whales increased from around 270 in 1990 to almost 500 whales in 2010. Since 2010, however, the population has declined and now has fewer than 450 animals.  Because the population size is so small, we unfortunately do not have much time to reverse this downward trend. There are only around 100 adult breeding females in the population right now. According to the recent assessment from both government and independent scientists, 20 right whales died each year between 2011 and 2015 (the most recent period analyzed) with females dying at a higher rate than males. At that rate, all of these 100 adult females will be gone in just 21 years. This means that in roughly 2 decades, there will be so few females left that recovery of right whales will be impossible.

Of the right whales whose cause of death can be determined, all but calves are found to die from fishing gear entanglements and ship strikes. Fishing gear entanglements currently account for 82% of documented right whale mortalities, while the remaining 18% are caused by ship strikes. An astounding 85% of all right whales bear scars from being entangled at least once in their lives,  and more than half have been entangled two or more times. While fishermen may not see right whales often (or ever) at sea, right whales encounter fishing gear throughout their range regularly. Pot and trap gear, such as that used in the lobster and crab fisheries, are largely responsible for whale entanglements, although gillnets are sometimes involved as well. Injuries and death from entanglements are prolonged and gruesome, and the suffering inflicted on the whales would never be tolerated if it happened to a land animal in plain view of the public.

The time to help this species is now. The longer we wait, the more difficult it will be to solve this problem, since every lost female removes both that female from the population as well as all of the calves that she would have had in the future. We also must act now to help preserve the fisheries that interact with right whales. A variety of approaches, including seasonal closures, weak links, sinking ground lines, and fewer traps per trawl, have been tried in different areas along the U.S. east coast, and while some of these efforts have undoubtedly helped, none has solved the problem. As the population dwindles, regulatory action will almost surely become more restrictive, ultimately infringing on the economic viability of the industry. Fishing gear entanglements threaten the survival of both right whales and the fishing industry, and there is an urgent need to help both with new approaches to fishing.

When whales get entangled, they entangle in ropes; they do not entangle in traps or buoys, only in ropes. Therefore, one of the most effective approaches to addressing the entanglement problem will be to remove ropes from fixed fishing gear, particularly for the trap/pot fishery. Doing so will benefit not only right whales, but humpback, fin, sei, and minke whales, basking sharks, and sea turtles, all of whom regularly get entangled in rope off the northeast U.S. coast. To develop a rope-less fishery, however, many practical aspects need to be considered. In this document, we provide our vision of how rope-less fishing could work. 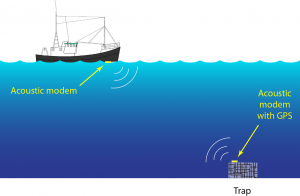 The location of ropeless traps on the sea floor must be identifiable from the surface in the same way that surface buoys mark the location of fixed gear today. Gear location identification is critical to avoiding gear conflicts (e.g., gear overlay by fixed gear fishermen, damaging gear by draggers) as well as for enforcement. We intend to accomplish this by attaching an acoustic modem to the gear at the sea floor. Just as a cell phone modem allows data to be passed through air to another cell phone modem using electromagnetic waves, an acoustic modem allows data to be passed through water to another acoustic modem using high-frequency sound waves (above the hearing range of whales). A battery-powered acoustic modem is mounted on a trap and programmed to communicate information about the trap (or the trawl to which the trap is attached) to an acoustic modem at the sea surface (hereafter called a surface modem) (Figure 1). The surface modem could be mounted on any vessel, such as a dragger, scalloper, lobster boat, or enforcement vessel, and it would send out broadcast messages regularly (e.g., once a minute) to request information from any nearby traps. 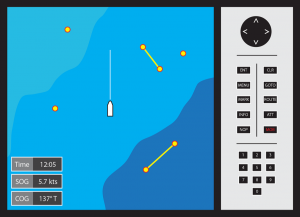 Figure 2. Example of a chart plotter showing the ship in the middle and the locations of traps (red circles) and trawls (red circles connected with a line) reported by trap modems.

In response to an information request from a surface modem, the trap modem would report its location (measured as the last known position of a GPS receiver integrated into the trap modem) as well as encrypted private data that would include the trap owner’s registration number, trap modem serial number, trap identifier, and possibly other sensor data (e.g., occupancy sensor to determine remotely how many lobsters are in the trap). Only the trap owner and enforcement would be able to decrypt the encrypted private data. For trawls, acoustic modems can be mounted to the terminal traps so that the location of both ends of the trawl (thus the orientation of the trawl) can be reported. We envision these location data being displayed on commercially available chart plotters so that mariners will be able tovisualize the location of nearby fixed gear in real time on their navigation displays (Figure 2). 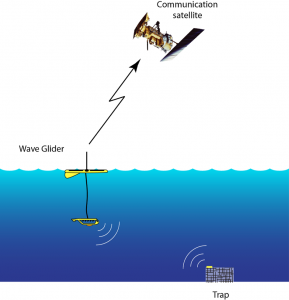 Figure 3. Acoustic communication between a trap and an enforcement wave glider. The glider sends information about the location and owner of encountered traps to shore in near real time via a communication satellite.

Monitoring the location and ownership of rope-less gear equipped with the remote gear identification system described above would be straightforward, and we envision three possible approaches. First, an enforcement vessel could simply survey with a surface modem to detect gear at the sea floor (Figures 1 and 2). The enforcement vessel would be able to decrypt the private data sent by each trap modem to access the owner’s registration number. Second, an autonomous surface vehicle like a Liquid Robotics wave glider (Figure 3) can be used to accomplish the same at-sea survey as a manned enforcement vessel. The glider can survey, collect information about traps, and relay that information to shore in near real time 24 hours a day for months at a time, covering more area for longer periods of time at significantly reduced cost than a manned survey. Third, an automatic trap reporting system (ATRS) can be developed so that any vessel that carries a surface modem will automatically report collected trap modem data (location and encrypted private data) to enforcement (e.g., using a cell phone modem). With this approach, every dragger,  scalloper, and lobster boat that goes to sea will act as an enforcement vessel. An additional and significant benefit to the  development of an ATRS is the recovery of gear that has moved from its original deployment position (see below).

The trap modem also activates the mechanism used to bring the trap to the surface for recovery, so it is required for rope-less fishing to work. Thus, enforcement of the use of trap modems for locating and identifying gear is likely unnecessary. However, enforcement could check traps and trawls dockside for the presence and functionality of trap modems if necessary. 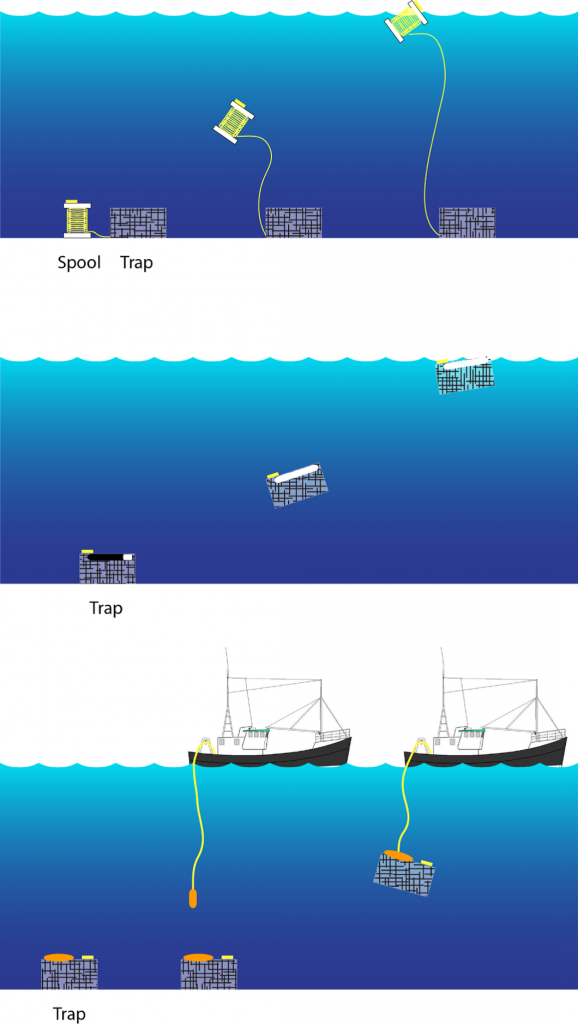 There are several possible recovery methods for a single trap or a trawl at the sea floor (Figure 4). Ideas to date include bottom-stowed rope, variable buoyancy traps, and a docking system. Bottom-stowed rope involves an end line that is wrapped around a buoyant spool or housed together with a buoy in a casing such as a cylinder or hollow trap. Upon acoustic command from the gear owner’s surface modem to the trap modem, the spool or buoy releases from the trap (or from the first trap in a trawl) and floats to the surface with the end line. Once at the surface, the fisherman can retrieve the spool or buoy and haul in the trap or trawl using the end line. For the flotation spool, a pre-wrapped spool of line can be slipped on the spool frame to allow quick redeployment of the trap (respooling of the retrieved spool can be done at a later time on the vessel or on land).

Variable buoyancy traps are negatively buoyant (i.e., they sink) when first deployed, but upon acoustic command from the gear owner’s surface modem to the trap modem, the trap becomes positively buoyant and floats to the surface where the fisherman can retrieve it. Buoyancy can be created by using (1) a piston pump that changes the volume of a cylinder (similar to buoyancy engines
used in autonomous vehicles such as profiling floats or ocean gliders), or (2) compressed air to fill an inflatable bladder.

A docking system is conceived to be used with traps that are equipped with a docking station. A docking “vehicle” would be  deployed from the fisherman’s vessel carrying a very strong, but thin, hauling line, such as Spectra line (the line must be thin to
reduce drag on the docking vehicle). The vehicle would use a transponder to locate and connect with the docking station on the trap. Once connected, the fisherman can haul the trap using the hauling line. A special pot hauler would be required to haul the thin line.

Rope-less fishing will have obvious benefits to whales, basking sharks, sea turtles and other marine wildlife by removing end lines from the water column, thus entirely eliminating the risk of entanglement in end lines. In addition, there will be benefits to fishermen as well. These benefits include the following: